I remember when I started my first amazon seller account and the excitement of that first reimbursement. I thought, “Hey, they can lose as many units as they want as long as I get paid for it!” However, knowing exactly what I was going to be paid was tricky! There can be grundles of missing, damaged, and unreturned items for which you don’t get reimbursed, or for which Amazon reverses the reimbursement. Say that ten times fast!

According to Forbes, Amazon ships over 2.5 billion packages every year. We recently took a virtual tour of one of the Amazon facilities and followed a package through 26 miles of conveyor belt tracks and auto-sorting machines held within one building. While this kind of mind-blowing logistical gymnastics is awesome, It’s easy to understand how a package can be damaged, stolen, or lost during the shipment process. Since some reimbursements slip through the cracks, let’s learn more about FBA reimbursement so we can understand what Amazon does to rectify lost or damaged product so you can recover as much money or product as possible. If you’re not frequently monitoring your Seller Central Account, you may miss out on these Amazon reimbursements. 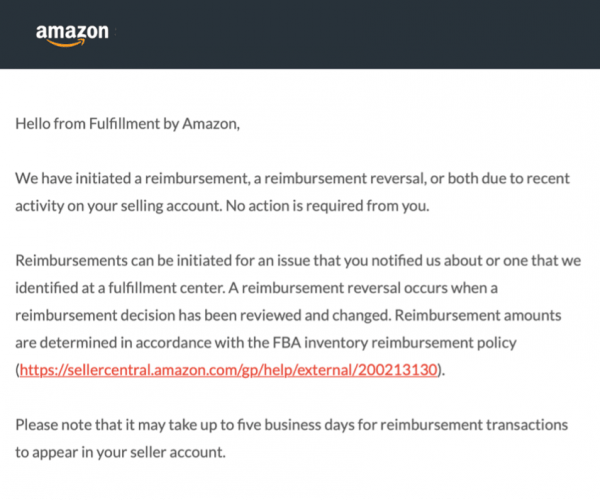 If you utilize Amazon’s FBA services by sending in inventory to their warehouses and any of your inventory is lost or damaged at a facility or by a carrier, Amazon will replace the item or reimburse you for it. It may go without saying, but you won’t get these reimbursements if you self-fulfill because you control the flow of product soup to nuts, not Amazon. The following comes from seller central and outlines what makes your stock eligible for reimbursements:

The basics of reimbursements are simple, but keep in mind that you won’t receive the full retail value of the item. Amazon deducts their FBA and referral fee from the reimbursement amount. Retail price can fluctuate over time so should Amazon pay you for your December or April price point? Actually, they compare several price indicators to determine an estimated sale price. Here’s what they consider:

If these guidelines don’t produce enough information (i.e. you’ve only been selling for a month and you have no sales history), they will assign an estimated value based on the closest comparable product. There are other special cases where Amazon can calculate the reimbursement differently, but let’s not get too far into the weeds on this blog.

Let’s get into what reimbursement reversals are. This occurs when Amazon takes back the reimbursement money they paid to your account and gives you the original inventory instead. This can happen for a couple reasons. If Amazon indicated some of your inventory was lost or damaged and then later finds the inventory as sellable, they may reverse, or take back, the reimbursement they gave you. Alternatively, perhaps a customer bought your item and then requested a refund. Amazon says that you will get a reimbursement if that customer doesn’t return the item within 45 days. However, we’ve seen that even after the 45 days, if the customer finally returns the product in new sellable condition, amazon will put the returned item back into your sellable inventory and take your reimbursement back. The Reimbursements report provides itemized details for all reimbursements, including those requested by you and those that are generated automatically.

While you can generate and download this report, it only comes in a txt file and is not as clear as this second option, which specifies the transactions better. Check this one out:

2. On the left panel under Payments, click Show More 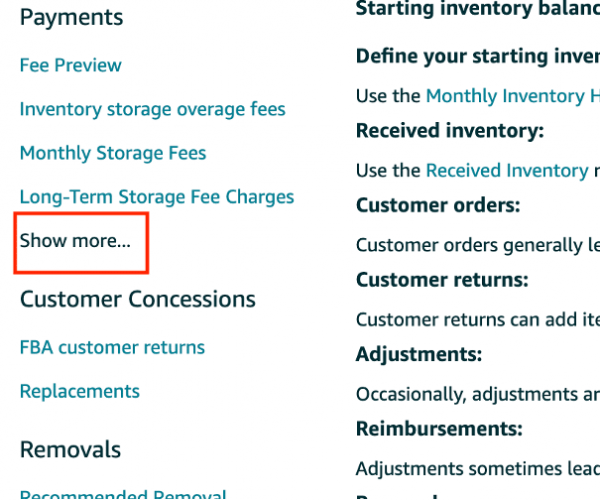 4. Go to the Download tab option and select your date range (I chose 30 days) and then download a CSV file of your reimbursements.

5. Open the CSV in your software of choice – I prefer Excel

You can see here that I have many reimbursements from customers not returning the goods on time or at all, labeled CustomerReturn. I’ve highlighted the Reimbursement_Reversals with the reason why it was a reversal in the far-right red box. In this case, the customer finally did return the unit after Amazon reimbursed my account so AMZ took their $12.75 back that they originally gave to me. Under the Reason column, two say Damaged_Warehouse. These are generally not reversed, but if a reimbursed unit has been lost and then found, it will trigger a reversal.

You can open cases if you see reimbursements that have not been paid out to your account, calling Amazon’s attention to an order number. There are also software services that you can purchase to comb through Amazon to find money you may have missed. We’ve seen some great things with Seller Locker finding thousands of dormant dollars for Amazon Sellers. Hope this blog helps you dig in and recover all the cash you are owed. You just might be surprised at what you can find!

PrevPreviousEasy Changes to Boost Your Ranking and Conversion on Amazon
NextHow does Remote Fulfillment with FBA Work?Next